The Lion, The Witch and The Walk-In Closet

ARTBEAT
The Lion, the Witch and the Walk-In Closet   TNT Staff, June 3, 2022   0   1 min read  13
Show Preview by Carrie Rheinfrank.
What do you imagine a lifelong performer, child dancer and choreographer from New Orleans, veteran of the New York theater scene, Topanga pied piper and founder of FOCUSfish might create during Covid lock down? Yes, Kirsty Z Beauvais wrote and conceived of a reflective, humorous, engaging one woman show, The Lion, The Witch & The Walk-In Closet with development assistance from director Kamakshi Hart. Performances will be at the Broadwater Main Stage in Hollywood June 5 (6pm), June 12 (5:30pm), and June 26 (1pm). Tickets at www.hollywoodfringe.org or bit.ly/kristyLION
Beauvais embodies various characters who comprise the admittedly somewhat hazy memories of her early years into her present life. Voices, real and imagined, convey the inner workings of a childhood mind and exchanges between restaurant customers and a 20-something NY actor working tables to make ends meet. Ultimately the scenes between Beauvais’ physical trainer self and the legendary Cloris Leachman in her 90s—who only offers barbs and back-handed compliments for her trainer’s efforts—create the catalyst for exploring memories and arriving at self acceptance. The struggle of this final persona with the possibly eponymous “witch”, seems to ultimately free our heroine from past demons as she embraces her place in the world and pushes her to become a star in her own right. Dance infused with energy, vulnerability and pathos frame this captivating solo show. 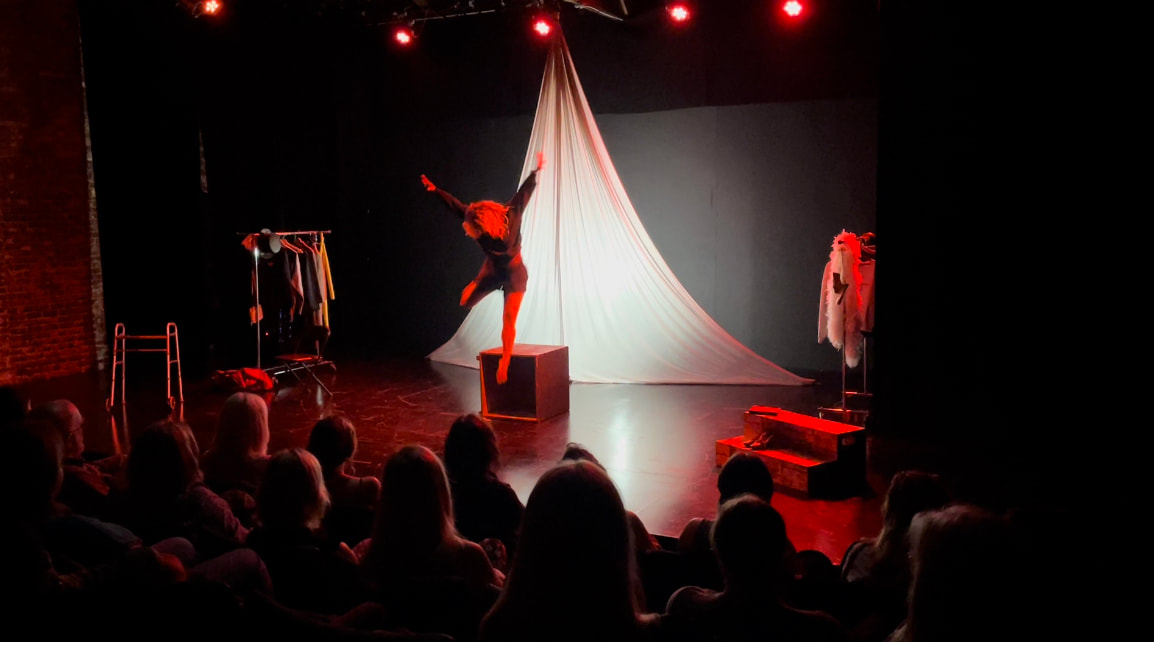 ​A NoHo Arts theatre review of the Hollywood Fringe Festival 2022 premiere, “The Lion, The Witch & The Walk-In Closet,” written and performed by Kirsty Beauvais, directed by Kamakshi Hart and running through June 26 at The Broadwater Main Stage of the Sacred Fools Theater Company.
The show starts simply enough. As audience members file in and take their seats, they’re treated to a delightfully retro opening soundtrack that sets the mood for a jovial, jazzy, mildly tongue-in-cheek story. As Kristy Beauvais enters the stage you can tell that we’re in for all this and much, much more.
Kristy instantly cements herself as a one-woman extravaganza by leading with all the talents she’s been using on stage since childhood. Dance, clever monologue, and a sharp sense of humor. Framed within the exposed brick walls of the Sacred Fools Theater Company, Kristy takes the audience on a wild ride that starts with the hazy recollections of a troubled childhood and arcs through a lifetime filled with vivid memories and imaginative characters — where barbiturates can talk and wiffle ball bats can walk.
The fact that this is Kristy Beauvais’ debut solo act makes “The Lion, The Witch & The Walk-In Closet” that much more impressive. From the first steps she takes on stage to her bittersweet exit and fade to black, Kristy positively radiates stage presence. As we find out in the opening act, Kristy has been putting on shows since she was a toddler — and it shows.
Over a lifetime spent on the stage, Kristy has built an impressive repertoire of theatrical powers, many of which come out in full force during the runtime of the show. Yes, she’s got great instincts for physical comedy (which see her shuffling madly around the stage and accentuating punchlines with a perfectly timed pose). Yes, she’s the proud purveyor of a host of strange and wonderful characters (the personas of which she can throw on and off as easily as she would the many costumes that adorn the titular ‘walk-in-closet’ of her stage).
But most engaging is Kristy’s ability to contemplate and faithfully inhabit the emotional truth of a moment. This is a story of a woman who has experienced some very challenging chapters in her lifetime, and it can be truly captivating to see Kristy shed her charming, quick-witted antics to delve deep into a memory that holds a heavy share of dramatic weight.
It’s moments like these that are swiftly followed by a hair-pin turn that sends us careening down a twisting pathway that’s filled with vibrant vignettes, curious characters and dance scenes that burst with youthful vigor and poise.This is a cycle we see play out many times throughout the show, driving the pacing like an emotional engine. Some of Kristy’s memories verge into the dark and disturbing, taking on elements of the psycho-drama — only to be offset by an intentionally jarring whip-pan back to one of Kristy’s colorful alter egos. It’s an impressive feat to see these moments of light and dark so well-balanced — an achievement that director Kamakshi Hart ought to be proud of.
“The Lion, The Witch & The Walk-In Closet” is a fantastical romp through the ages and stages of one woman’s life that is equal parts charming and moving. From the first, audience members are bound on a journey that charts the transformation of a fearful young girl, destined for showbiz, to a wry, witty woman who’s seen it all before (and then some).
It’s filled with graceful movement and out-of-pocket absurdism, all working in harmony to create a total act of on-stage surrender by the barefoot and brave Kristy Beauvais.Meet the memories and the mirrors, and support the arts by booking a ticket to “The Lion, The Witch & The Walk-In Closet” today. 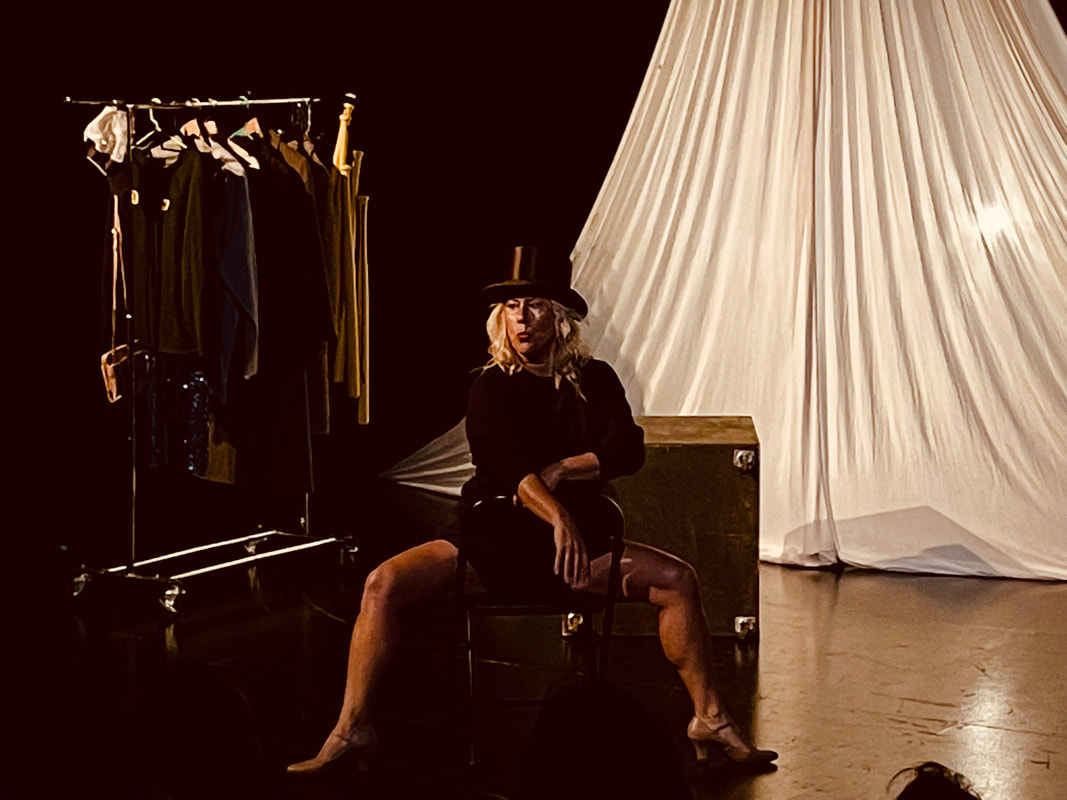 ​"If life is a circus, we might as well train for it." ~ Kristy Beauvais, Flounder for FOCUSfish
Donate
​Copyright © 2020 FOCUSfish. All Rights Reserved.
FOCUSfish is a nonprofit 501c3 organization | EIN # 26-0530647 | View Guidestar Profile
FOCUSfish is committed to a work environment in which all individuals are treated with respect and dignity. Each individual has the right to work in a professional atmosphere that promotes equal opportunities and prohibits discriminatory practices, including harassment. Therefore, FOCUSfish expects that all relationships among persons in the workplace will be business-like and free of bias, prejudice, discrimination, and harassment.

In order to keep this commitment, FOCUSfish maintains a strict policy of prohibiting unlawful harassment of any kind, including sexual harassment and harassment based on race, color, religion, national origin, sexual orientation, gender identity or expression, sex, age, physical or mental disability or any other characteristic protected by state, federal or local employment discrimination laws. This policy applies to all FOCUSfish agents and specialists, including supervisors and non-supervisory employees, and to independent contractors who engage in unlawful harassment in the workplace.

Sexual harassment includes, but is not limited to, making unwanted sexual advances and requests for sexual favors where either:
Employees who violate this policy are subject to discipline up to and including the possibility of immediate discharge. Examples of unlawful harassment include, but are not limited to:
Any employee or other person who believes they have been harassed by a co-worker, supervisor, or agent of FOCUSfish or by a non-employee should promptly report the facts of the incident or incidents and the names of the individual(s) involved to their program coordinator or advisory council contact, or in the alternative, to a board member. Upon receipt of a complaint, FOCUSfish will undertake a prompt, thorough, objective and good faith investigation of the harassment allegations.

If the organization determines that harassment has occurred, effective remedial action will be taken in accordance with the circumstances involved. Any employee determined by the FOCUSfish to be responsible for harassment will be subject to appropriate disciplinary action, up to and including termination.